I do have a good excuse though, I am working full-time Monday to Friday and I am taking 3 upper level classes that will almost finish off my degree. I am good to live tweet during games on the weekends but I get to miss 75% of the weekday ones :-(. I am trying my best, I promise!

So what’s new this week? International break. Lots of good interviews though!

Khedira told Kicker: ‘I’m not a Spanish player, I did not cost a lot of money and I am one of Mourinho’s disciples” you will not find any water clearer than this! I sure hope Sami is well aware of the Khedirismo movement in the social media networks. It is quite big. Of course he also had something to say about the departure of his brother Mesut., “A lot of players have lamented him leaving, including me. To lose a player with his qualities weakens the team, but we have other players of quality”. Sami admits that the level displayed by the team is not the best and maybe it is just a matter of time. 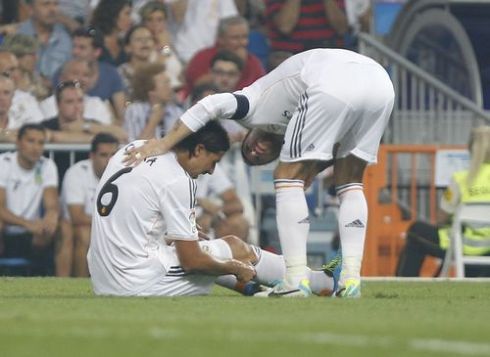 So how aboot Karim Benzema eh? (Sorry, I had to, it’s Canadian thanksgivings week)

The cat has been criticized by 99% of Madridistas and 100% of the rest of the world despite having his best start of a season, ever! And now that he was in the deepest hole, he has managed to score two goals in 48 minutes with the French national team! Let’s hope he brings back those goals to the Bernabeu, they will be much needed in these weeks ahead!!

Speaking of monsieurs… M Raphael Varane spoke to the FIFA this week in an interview where he revealed the real reason why he joined Real Madrid, talked about his maturity and his childhood hero. Here are the highlights of the interview:

FIFA.com: You’re often described as having an old head on young shoulders. Where does that maturity come from?
Raphael Varane: I think it’s all to do with my relationship with my big brother. He’s two-and-a-half years older than me and I’ve always wanted to catch up with him, though he’s done all he can to stop me from doing that (laughs)! I think that’s what’s made me grow up a little more quickly. And then I went to boarding school when I was young, at the age of 13, which maybe helped me mature too. I’m quite a calm person. I don’t lose my cool and I don’t put unnecessary pressure on myself. Things like that helped me turn professional at the age of 17.

You signed for Real Madrid when you were 18, after just one season with Lens. Did you have any hesitation about making such a big move? Were you tempted to stay on and develop your game at a smaller club?
Yes, of course. A lot of thought went into that decision. My initial feeling was that it wasn’t worth it and that I wouldn’t get a game. Then when I heard what the coach’s plans were I changed my mind. I didn’t go into it with my eyes closed. It was Jose Mourinho who convinced me. He said that I’d progress, that I’d reach the very highest level and that the move would be nothing but positive for me.

You made your first start for Madrid on 21 September 2011, not long after your arrival at the club. Did you expect to be thrown in at the deep end so early?
I was expecting it, because it came up in the chat I had with Jose Mourinho. He told me that I’d have my chance to play and that I was going to find out about myself and get to know myself better. I’d never been under a lot of pressure before, either on the pitch or off it, and he said that I’d soon be given the opportunity to find out how I’d react to it. Mourinho kept his word. In the two years I played for him he always kept his word, and he also knew when to throw me in at the right time.

What is it that makes Mourinho such a special coach for you?
I’m only young and haven’t had many coaches, which means it’s difficult for me to make comparisons, but I’d say it’s his personality and charisma, which were felt by the whole team. He’s a winner, a competitor, and he transmits that to his players. Wherever he’s gone he’s always created combative teams with lots of character.

Which defender do you model yourself on?
I watch a lot of players in my position, but if I had to name a role model, I’d say Lillian Thuram because of the way he carried himself on the pitch and everything he did in his career. I loved his enthusiasm, self-sacrifice, desire and competitiveness, and I admire his personality and charisma too. I’ve even read his books, and I think he’s someone who can inspire youngsters. I was five when he scored his two goals in the semi-final against Croatia at France 98, but I remember it and it made an impact on me. To score those two goals at a time like that was special.

Our diamond sure knows how to speak on and off the pitch! A great example for the youngsters in our cantera to have despite his young age. Hard work, determination and a head on your shoulders are key! 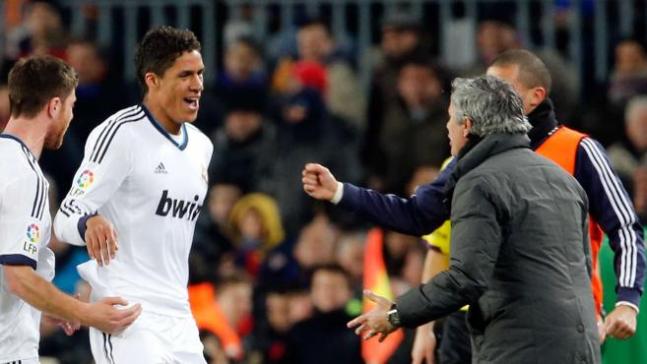 Lastly, mister presidente was on Punto Pelota last night. What did he say?

To all Falcao fans Florentino reiterated that the tigre wants to play for Real Madrid and while the move will not be possible in January, June is a whole other story. Furthermore he spoke about Karim Benzema and said that while they receive offers for him every window, it is the manager who has the final say. On the other hand, he said no offers have been received for Sergio Ramos who has been wanting yet another renewal (aka more $$$). Speaking of renewals, Xabi’s contract ends up next summer and Florentino has said that as long as Xabi wants to stay, he will. One who does not want to leave the club despite the rumors though is Iker Casillas, who the president says will likely end his career where he started it.

Florentino showed to be upset about the Gareth Bale situation. The Spanish media, lovely as always, said he had a hernia – which is *surprise* false. Floren does not understand why someone would publish something so mean and false and highlighted that certain players are hated for no reason even before they are given a chance to show off on the pitch. It looks like our dearest president is realizing that the media is not exactly behind the team. In some good news though Floren said that Gareth is ready and waiting for Saturday to arrive. I am excited as well! I think this sums up the week! I hope I have made up for my absence, cheers and Hala Madrid!!

I post interviews, comments and news about Real Madrid
View all posts by rmadridgirl →
This entry was posted in Uncategorized. Bookmark the permalink.